Terlisa Sheppard is a 4-time breast cancer survivor of 23 years.  She was originally diagnosed in November 1998, with stage 3 HER2+, ER+, PR+, breast cancer at 31 years old, and while 8 ½ months pregnant.  She has been living with stage IV metastatic breast cancer for 20 years and has metastases to her bones, lungs, liver, spine, abdomen, and brain. 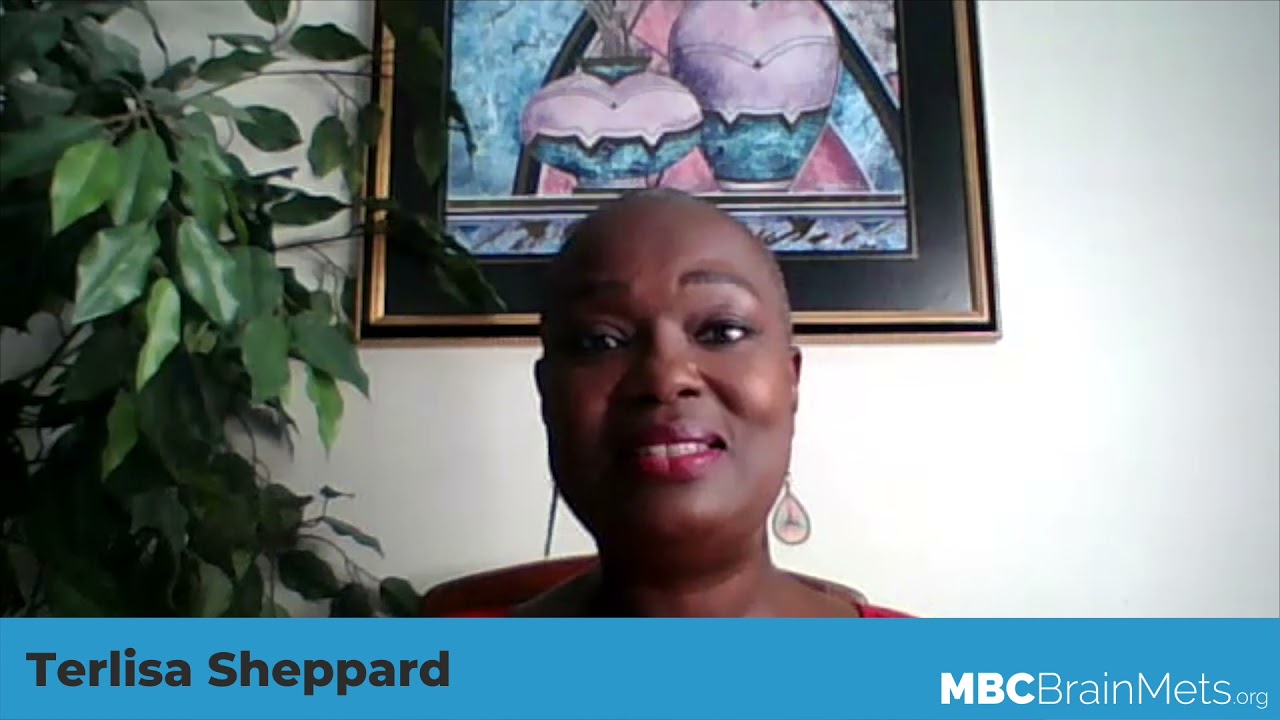 And that was, I remember it like it was yesterday, August of 2003, and they thought it was very important that they whisked me into surgery. Probably not even two weeks later on August 15th, 2003.

So before the brain metastasis, I had been on chemotherapy, I had surgery and then radiation after that. The thought was because my tumor was so aggressive with the pregnancy diet that I had started with my breast cancer diagnosis, it was done upfront to go ahead and try to shrink the tumor as much as possible.

And that did help. It went down sizably so we were able to have a very successful, at that time, surgery and radiation afterwards, before I was actually diagnosed with the brain metastasis in 2003.

I was diagnosed with my first brain metastasis in August of 2003. And at that point, I had stereotactic radiosurgery – we referred to it as SRS surgery – and to have radiation to go directly to the site of the tumor. And at that time I had like a two centimeter tumor.

And 18 years ago is when I went through one of the most traumatic experiences of my life. I had no idea going into this diagnosis, what all it entailed. I had no one to talk to about it. It was completely new to me, but I knew I had to do it. You know, at that point, I had already had all the previous metastasis from the breast cancer, so it was moving forward for me. And at that point, if you can imagine having this big steel frame screwed into your head. I literally had the toolbox that my nurse gave me, sitting in my lap as he got different tools, the screwdriver, and screwed this frame into my skull.

Of course, you know, I was medicated at the time, but I still felt a little tugging and I could see that toolbox in my lap. So, you know, your mind gets to wondering, what am I going through now? What’s next? But I knew, as I said, it had to be done moving forward with my diagnosis.

So I really started having symptoms before going into the craniotomy. The symptoms – they were unbelievable actually. And me being, or trying to be, the strong person that I thought I was, I tried to just get through it, you know. But knowing that I wasn’t used to headaches on a daily basis, and I was beginning to have these headaches every day.

I would wake up in the mornings and it became so tough for me to even lift my head. It got to the point where I was literally just, you know, holding onto my head from the pillow, trying to get up out of the bed. And even with that, you know, then came the swelling. I had no idea until the MRI was done, but even before that, I had this feeling and ringing in my ears where it felt like I had been swimming underwater for days, and I hadn’t been swimming at all. I love the water, but I didn’t love it that much.

And after consulting with my medical team, my oncologist, I was pushed into the MRI immediately. And that’s where it showed up. You can literally see the swelling where the center of my brain should have been centered, but it was pushed so far to the other side that you knew immediately, even without a medical degree, you knew that something was going on.

And after finding out and sitting down and talking with all of my medical teams, I found out it was from the necrosis that had built up from the original 18 years ago, the original SRS surgery. And if you can imagine nine hours of laying on the table receiving that SRS surgery, then necrosis, you know, that pretty much would have been a symptom 18 years later.

My brain specialist, at the time, was going through all of these different scenarios with me – what was going on with my brain and the swelling. And sitting there, listening to him, I didn’t want to believe, or want to hear that “Terlisa, this could be cancerous, or it could be just necrosis from previous surgery.” So I literally went through this craniotomy surgery, not even knowing how I was going to come out on the other end.

For those of us who have gone through a metastatic diagnosis, you sort of cringe at even knowing what could come next. You know, will there be more chemotherapy? Will there be more surgery? You know, what are my daughters going to have to go through again? You know, they pretty much grew up through my diagnosis. They’re grown now and I’m very grateful, but just watching them growing up through this diagnosis, I had so much going through my mind at the time. And I knew I had to move forward and go through it.

So we had the craniotomy surgery on February 22nd, 2020. I’ll never forget that date. Here I am again, having a procedure for brain, and possibly brain metastasis. And I had no idea what would be.

Going through this diagnosis – actually going through this diagnosis during a pandemic – was even another hurdle to climb for me. And believe it or not, I spent two days in the hospital. Not even a brain person who had brain surgery, a craniotomy – they could not find a bed for me. So I literally spent two days in ICU, just pretty much laying there during that time, and it was so tough.

So I was actually released to go home, not having the stability that I should have had before being released, but my options were very slim. But I was very grateful even after going through all of that, getting my pathology report. Can you truly believe it was no cancer? I was completely overjoyed.

You know, in my mind, having had all of those metastatic diagnoses, “Oh, I can deal with this. I can deal with the brain swelling.” You know, even the steroid weight gain. But, of course, yes, it was tough. And even moving forward, you know, February of next year would be a year. And of course, the steroid weight is lingering, but that’s very minute in my book. I’m still here. I’m still on this journey, I’m still pushing through and very grateful for any science that is helping me and others to get through this diagnosis. So, yay for the pathology report!

My overall diagnosis has been truly, you know, life-altering for me. But I can tell, and will tell, anybody else, I literally have been living in the moment. I can’t really explain how I got here 18 years later after my original diagnosis. And then this year, having to have a craniotomy because of that original diagnosis and necrosis, swelling of the brain. But I try to, and it’s very cliche, live in the moment, live my best life.

I consider myself completely blessed to be even here at this moment, and to see my daughters grow up. When I started this journey almost 23 years ago, from my original diagnosis, I was pregnant, and I had a daughter who had just turned two years old. They’re grown now. They’re 25 and almost 23 years old. I can’t not tell you how elated I am to just have witnessed that.

And yes, they have grown up through this diagnosis, but I saw them grow up. And they’re living well, considering all that they have gone through watching me go through this diagnosis. So live your best in every moment. You know, I don’t know when my time will expire going through all of this, but I will say that Terlisa lived all that she could for that particular moment.