Lynda Weatherby is an MBC patient whose advocacy work includes co-founding the Northwest Metastatic Breast Cancer Conference as well as the MBC Patient Advisory Group to Komen HQ. Lynda was first diagnosed with “Stage 0” DCIS in 2001; after a bilateral mastectomy she was told she had a 2-3% risk of recurrence, but in 2013 her cancer roared back with metastasis to her bones, brain, and a life-threatening tumor to a major facial nerve. Lynda is doing well today after two Gamma Knife SRS treatments and ongoing hormonal therapies. She remains deeply grateful for life-saving interventions and care from her team at Seattle Cancer Care Alliance. 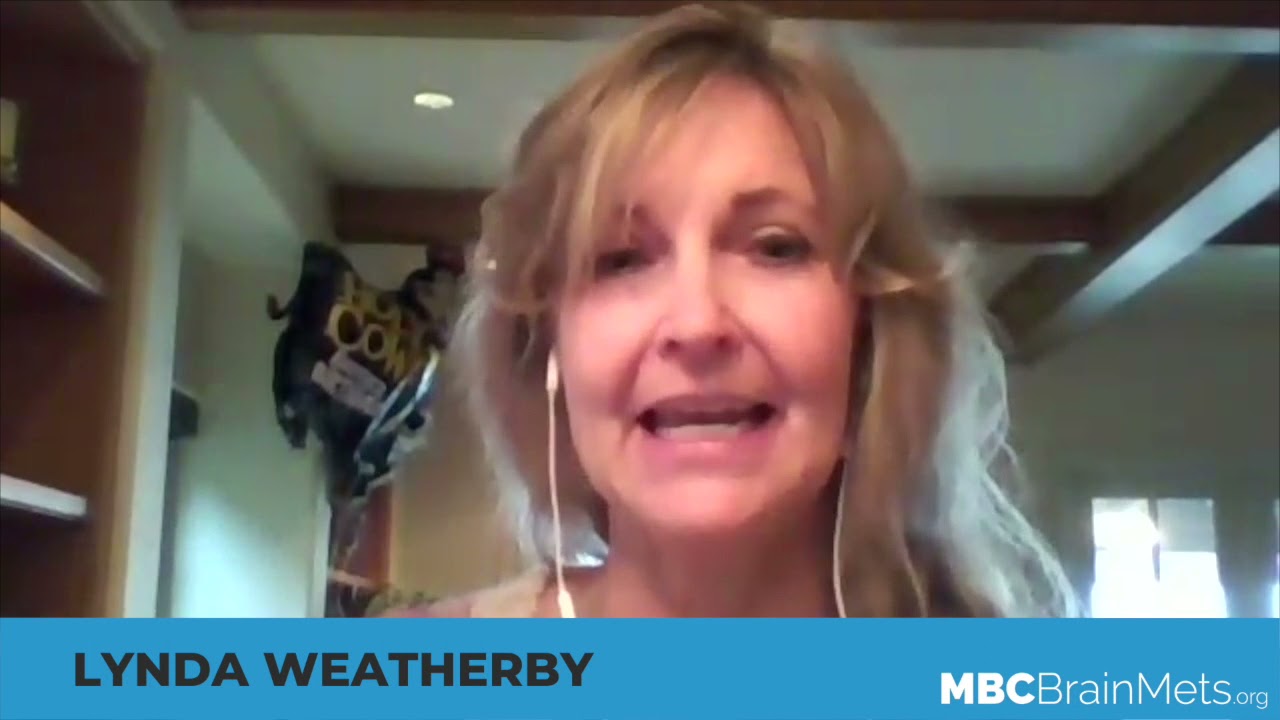 I was having bone pain that I did not associate with a potential recurrence of breast cancer. I just did not have it in my head. And I was 12 years out from an early stage diagnosis when my symptoms really started coming on – that were symptoms of metastatic disease. I had, in a very condensed series of days, I received the word that I had bone metastasis. And that weekend, while I was waiting to go in on Monday to get my PET scan to understand the bone metastasis – that weekend, I had a terrible pain on my face. An excruciating pain on my face that dropped me to my knees and took me out. And my husband took me to the emergency room.

And the emergency room – we alerted them about the bone metastasis that I had just found out about two days before. And they thought that the pain on my face was something entirely different, which was terribly overwhelming and did not even consider cancer. So they basically sent me home with the best painkillers they could manage for trigeminal pain.

When I found out that I had had a spread to my brain, I just was really unable to process it. It was not in the realm of possibility in my mind. I had had an early stage cancer 12 years earlier. There was just no thought ever that it could come back because I was told I had a 2 to 3% chance of recurrence.

I had extensive bone mets on my recurrence, but then also tiny, tiny spots to the cerebellum and a tumor on the trigeminal facial nerve, which just didn’t – it just didn’t add up. And I spent a few days just in complete shock. My doctor recommended that I take Ativan to kind of get through those first days and the days of the first PET scan, the first MRI. And that was extremely helpful. I mean, I totally needed it.

Once I found out I had the brain mets and kind of the shock factor wore off, I was referred immediately to a local doctor in Seattle at the University of Washington for a consultation and for consideration of Gamma Knife surgery, because my spots were very, very tiny. They were on the order of a couple of millimeters in several different places, maybe up to five places.

And once I met with this doctor at the University of Washington, I really did feel confident with her. And I love her to this day. I mean, she saved my life and I went ahead with Gamma Knife with her on the recommendation of my primary oncologist. And she also treated the tumor that was on my facial nerve.

I haven’t met anyone else who’s had a tumor on their facial nerve, but it does happen. And it was in an inoperable spot. So it had to be radiation. So she treated the cerebellum and the facial tumor, facial nerve tumor, and that was at diagnosis. And we have been monitoring with her. I’m eight and a half years out from that treatment. We’re still monitoring with her every three months.

I did have a second Gamma Knife in 2018. So that was five years after the first. And it wasn’t really for progression. It was more for things that had been on watch that they had gotten some new technology, and they could visualize them better. And she said these things, I think, indeed, are tiny micro mets. Instead of keeping them on watch, let’s go get them.

So we did that in 2018. I think altogether now I’ve had about 12 spots treated with Gamma Knife, including the facial tumor and one skull met. But things have been quiet since 2018. We just keep monitoring. And my doctor says, you know, there’s always an end of the tail of the curve and that’s kind of where I’m living. And I hope it stays that way, obviously. But I feel really, really lucky for the care that I got.

I believe I started the day with an MRI to get a, you know, up-to-the minute current MRI compared to the last one that I would have had, which would have been not too far before this treatment day, maybe a couple of weeks. My doctor, treatment doctor, radiation oncologist sits with a physicist to plan out the actual treatment. You know, very, very precise down to every site they’re going to treat.

Then, for Gamma Knife, they place the helmet on the head, and that’s specific to Gamma Knife. And that was not done by my radiation oncologist. There was another doctor in the practice who was expert at placing these helmets, just super fast. So I believe I had three different relaxants in order to get the helmet placed. I’m pretty sure that was standard. It wasn’t unique to me. They give you an IV with some kind of real relaxing medicine. I took an Ativan and they numb the actual spots where they screw in, bolt in, to the forehead, down to the skull. So the bolt or screw goes down to your bone, through your skin, and then two at the base of the skull.

And this guy did it so fast. It was honestly less than a minute that he was just zip, zip, zip, zip, and I was done. You stay in the helmet while the doctor and the physicist are finalizing, finalizing everything. And then I entered the treatment room. And the machine looks, to the best of my recollection, the machine looks like a doughnut machine. You know, we’re all familiar with scanners. And you lie on a table and you go back into the scanner and then the helmet bolts into the machine so that there is no chance of movement.

And treatment, I don’t remember treatment taking that long. Now it depends on how many sites they’re treating and there’s a maximum that they will do with Gamma Knife. But I probably had, I think I had three sites the first time, and then I had quite a few more the second time – up to nine. Sorry, four sites the first and then maybe eight on the second. I think I’ve had 12 altogether. One being a facial nerve tumor and another being a skull tumor that we found on the day of treatment. And my doctor said, do you want me to treat it now with Gamma Knife? I could have waited and had regular radiation to it, but I said, no, absolutely treat it now.

So I think I’m up to a total of 12 sites. And it was less than an hour, definitely. And then they keep you for observation for just a little bit and take the helmet off when they’ve decided that you’re not reacting to anything and you go home.

So when I got home, I did come home with meds, that was basically prednisone, to control swelling in the brain after treatment like that. And I think that’s pretty standard. For me, the oddity about me was this tumor that I had on a facial nerve was really, really rough. And I had a very tough time getting off prednisone and feeling okay. So that was complicated, but that’s really unusual. For everything that was treated in my brain, I feel like that recovery just went really smoothly. I did have an awful lot of fatigue afterwards.

The first time I had Gamma Knife, I was also undergoing regular radiation at the same time for spots on my vertebrae. I was in the middle of a three week radiation plan and we took one day off and did the Gamma Knife. But the combination of those two together was, I mean, I was in bed. I was not up on my feet. So that was kind of a lot. It was definitely doable, but just something to plan for if, you know, for anyone who’s in that same situation.

The second time I had Gamma Knife, it was five years later. I was not undergoing any other treatment other than systemic aromatase inhibitors for my bone mets. And the fatigue was far less. Definitely a few days. I mean, you know, you just give yourself some space to kind of lay down and do Netflix. But, nothing like the first time when I had both radiations going on at the same time.

What I’ve learned as a patient is that there’s a great podcast now for MBC patients through SHARE. And they always say, no one should go through MBC alone. And that is absolutely the truth. I mean, when I was first diagnosed, I knew of a couple of people, but I didn’t really know any MBC patients and the best thing I have ever done is go out in search of other patients, kind of going through the same thing that I’ve experienced and different stories too. Cause there’s lots of different types of metastatic breast cancer.

But try to connect with others. And in brain mets, especially because, you know, not everybody gets brain mets, it’s kind of a subset. It can be so helpful just to hear other patient’s stories and how they’ve had good luck and, you know, great providers. You can get the names of people to go see and, you know, other institutions to go to, if you’re not satisfied with where you are.

One way to do that is to go to the mbcbrainmets.org website. This is a new website being built largely by advocates who have been through this and are just converging all kinds of resources and information about how to get current treatment and standard of care treatment in brain mets for breast cancer. But definitely try and find other people – connect over Facebook, you know, connect – I’m sure the website can also provide a list of resources and maybe a list of other ways to connect to other patients too.